Posted on March 20, 2016 By londonwomensracing

Lucinda Kerr is a member of London Phoenix and also competing in the LWR Spring League. We asked Lucinda about her winter training, and how she had planned to start her 2016 race calendar with a bang. 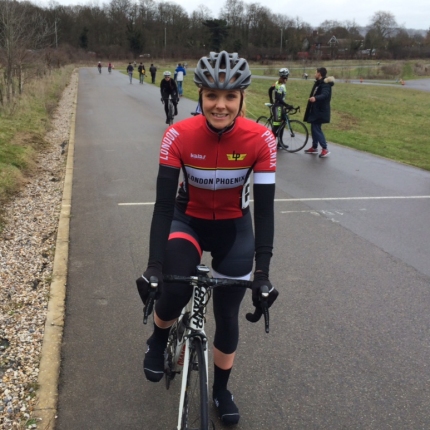 The excuses start mid afternoon. Reasons not to go – it’s too cold, my legs are tired, I have to stay late at work. I have a coffee, an unnecessarily large snack and remind myself of my goals. I’m committed now.

Having started racing at the end of 2015, I was determined not to go into 2016 hanging on at the back of the pack in races. I wanted to be in on the action, chasing down breaks and actually be in with a shot of gaining some points in the sprint finish. There’s loads of brilliant guidance out there on how to get faster, from turbo sessions to hill reps. As well as plenty of less helpful advice such as spending thousands on the latest carbon bike and surviving on a diet of energy gels and beetroot juice. However, the main recommendation that comes up time and time again is “cycle with faster riders”. For me, this meant braving the infamous London Phoenix winter chaingang. 45 minutes of through and off round Regents Park inner circle in the bleakest of winter evenings. The very thought made me shudder.

With a welcoming nod hello from the group of riders congregating at the gate, strangers in the night, it’s time to get going. Split into groups, spin the legs, we start the chaingang. Calls of “clear” and “last” echo round as we adjust to the darkness and look out for hazards. As my turn on the front approaches I can feel the pace lift slightly, damn why do I always end up on the front for the hill? A more experienced club mate notices my predicament and adjusts the pace to ensure I get an easier turn. The next few laps pass without incident, a decent pace, with each rider doing a turn on the front then smoothly moving back down the line before coming back up on the outside. Poetry in motion.

Suddenly and without warning there’s an acceleration up ahead, with a flurry of clicks I go up a gear. My turn on the front again, it’s coming round quicker now. I struggle to latch onto the last wheel and labour to catch my breath. Once again the tempo rises and I feel myself go even further into the red. I look around and notice others are puffing away, my companions in adversity, desperate to hang on, to last longer than last week. We are motoring round now, I focus on holding on for one final lap before the line blows to pieces and all eight riders scatter across the road as if someone let off a grenade.

We ease up and recover. I survived another week. After a few cool down laps we gather in the cafe for a well deserved hot chocolate and debrief. These strangers in the night have become my comrades in the darkness.

Next time you head out with your cycling club, try the fast when previously you’ve headed out on the medium club ride, ask questions, make mistakes, getting dropped isn’t the end of the world. And if you ever find yourself in Regents Park on a Tuesday night, come and say hi! 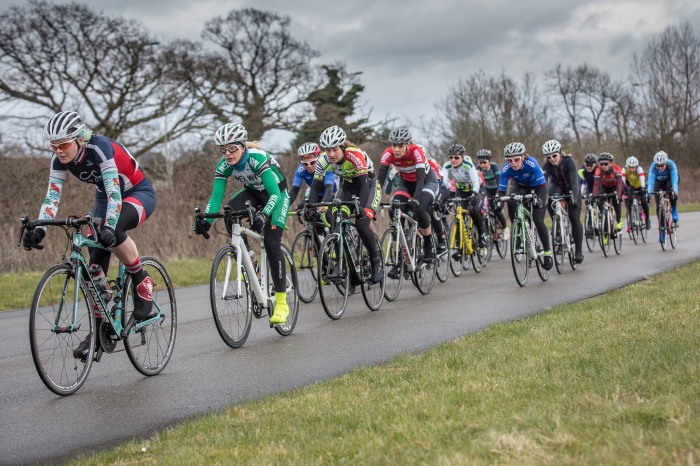 Happy New Year everyone! . Our fabulous friends @east_london_velo are putting on a series of women only races at Hog Hill. The first one is on 25 Jan and online entry is open now. . For any newbie racers considering this, Hog Hill is a nice circuit and it's very accessible from all over London - even if you live in the South West! There are trains running regularly from Liverpool St to stations near the circuit (such as Goodmayes or Chadwell Heath) and it's an easy 10-15 min ride from there. . If you haven't been there, the circuit has one main hill, hence the name! And what goes up must come down so you also have a nice downhill section in it! The rest of it is pretty much flat with a few gentle corners so it isn't too technical. . There's a club house at the circuit with changing rooms including showers and toilets and there are lockers to put your valuables in (bring £1). It also has a nice cafe so you can enjoy a cup of tea and a natter with mates after the race! . There are 2 more races in the series - 15 and 22 Feb. These are all cat 2/3/4 races but they are awarding prizes to the top 3 and 4 cat finishers so there's plenty to race for! The entry link to the first race is in our bio. Kick start your 2020 race season early!
Our league might be over but there is still loads of summer racing to be enjoyed...like this next weekend! Find it on the @britishcycling website to sign up!