What to Expect from Your First TT

Kathryn, our Co-TT Secretary, talks about what you might expect from your first Time Trial (TT), if you sign up to take part in one of the 2017 TT League races. Images by Huw Williams and Kathryn.

Many Time Trials start early in the morning, often in remote locations but we have deliberately chosen the first one in our series to be easily accessible for everyone, with or without a car. The ‘H10/8’ is a 10 mile course starting in Bentley up and down the A31; the HQ is about 5mins cycle ride from Bentley station which has regular trains from Clapham Junction. And it’s fairly likely there will be a bunch of ladies getting the same train down as the organisers will give the women similar start times, so you’ll be in good company!

What to expect when you arrive. 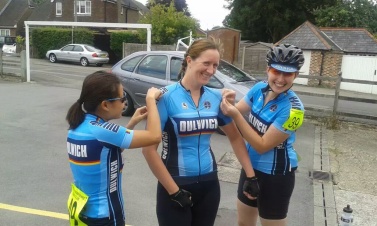 Aim to arrive about an hour before your start time to have time to sign on, have a chat, warm up, pin your number on, go to the bathroom 5 times and then get to the start. You can leave a bag at the HQ, which is a village hall (at your own risk, obviously, but things are usually pretty safe).

Some people warm up on a turbo trainer or rollers in the car park, other use the roads near to the start to warm up… There is a good track not far from the start of the Bentley course that you can go up and down to warm up on (it has a hill!), which you can look up on a map before you go, or ask around about where people are warming up when you arrive. There’s a useful basic British Cycling 20 minute warm up you could try if you don’t already have one in mind.

The course for the first TT in the league is fairly fast compared to non-dual carriageway courses, but constantly rolling… It’s not flat but I’d say all the hills are big ring climbs. The trick is to pace yourself so you have as much for the second half as the first, but have nothing left at the end! If you’ve never done a TT before, this will be an excellent marker in the sand as to how quickly you can ride 10 miles without stopping! Next time you’ll have a better idea what time to aim for.

After the race, when you return to HQ, claim your complimentary cup of tea or Nescafe (when you hand your number back!) and then have a chat with others and as you wait for the results to trickle in. This is the best bit… You’ve done your work and now you can soak up the kudos and wonder about whether you could have squeezed out another 5 seconds to beat that person who just pipped you – next time!

Transport should be really easy for this TT, and once we know who wants to come back, and people have made friends, we’ll make sure to try and match up anyone who can’t get to the more remote TTs in the league with someone with space in a car.

Once all the results are in, we’ll gather the ladies in the series and hand out prizes for the fastest in each of our LWR league categories. That means you don’t have to be super fast or in aero kit to win something! Keep an eye on those in your category, they are your competition and a great source of motivation to push that little bit harder next time.

So, time to sign up! Join LWR, and then sign up to the first TT. There is no EOL (enter on the line) for Time Trials because they have to give out start times to everyone, and the deadline is the 28th Feb, and is final!

One last tip – please ensure that once you have committed to a TT that you make every effort to attend. It is of course disheartening for the volunteers who have given up their time to run the event but there are several other reasons specific to TT that mean it is frowned upon to ‘DNS’ (Did Not Start). If you cannot start for reasons such as illness or injury you should also let the organisers know, and you’ll be put down as ‘DNS [Did Not Start] with apologies’ as opposed to just ‘DNS’ which on its own is considered very bad form in the community. You can read the full explanation on the excellent TT info that Kathryn and Julie have written up.

Most of all, though have fun! It’s a great feeling to really push yourself, and to be in the running for some of the great prizes we have up for grabs.

IMPORTANT ANNOUNCEMENT: We here at LWR, along with everyone in the country, have been closely watching the news as the situation with COVID-19 develops. As you know, our 2020 league was due to kick off this weekend with our first crit on Saturday and our first TT on Sunday. We have today learned of the following news from British Cycling: “Based on the Government’s latest advice and guidance on the developing situation around Coronavirus/COVID19, British Cycling has suspended all of its sanctioned cycling activities, initially until April 30.” Whilst we are of course disappointed by the news, we fully respect and support BC’s decision and will be suspending our leagues until the situation changes. We know that this decision hasn’t been taken lightly and that is it based on government guidelines issued yesterday against unnecessary travel and contact with others. We feel it is important that we also take the necessary steps to protect the health and wellbeing of everyone involved in the racing community, not just our wonderful LWR members but also our amazing race officials, volunteers and spectators, to help alleviate the risk of spreading the virus and an additional burden on the emergency services during this testing time. To help with motivation, we are looking into providing some alternative riding and racing for the LWR league via Zwift. Let us know if this is something you’d be keen for! And finally, there is some good news from BC! At this time, they advise that you can still go out on your bike so long as you follow the relevant guidance with regards to social distancing and hygiene. So stay active and healthy, keep training and get ready for when the LWR leagues are back up and running. The LWR Committee ❤️
Entry closes for the first TT of the season tomorrow! Gonna be a good one! Not sure if TT is your thing? We have a road bike league that is perfect to anyone looking to try out a TT! Happy entering 🙌🏼